In all, fifteen issues of Demonground: Reflections of a Darker Future were published.  You can still download them from this archive.

All issues of Demonground were provided in pdf form in both a4 and letter paper sizes, so it would be easier for the reader to print a hard-copy. The download link ends with “a4” or “letter” accordingly.  Click the appropriate link below to download the a4 or letter version that corresponds to your printer size. 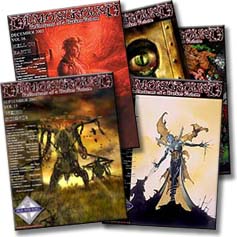